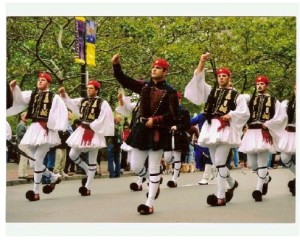 By Georgia Tsoromocos – As a first generation Greek-Canadian, the importance of maintaining the distinctive culture, history and religion of the homeland was emphasized on a daily basis at home, particularly when it came to March 25th, Greek Independence Day.
The Greek school hosted its annual assembly where as a student I wore the uniform of a crisp, starched white blouse and navy blue skirt to sing songs and recite poems alongside my fellow classmates. At that age I was too young to comprehend what it all meant. It was more about memorizing lines and singing on key versus fighting for freedom . Years later, as I near 30, the importance and value of this day, makes sense.
Each day the media shows us countries where independence is being fought for unsuccessfully around the world and the plight of humans trying to survive in the midst of war and suffering. We see it and we feel pain. For our ancestors, we rely on historians and literature to relay the message. There are no camera crews, photographers or journalists to document the ill-effects of that fight, that war. One would think that it wouldn’t penetrate our souls in the same way and yet, it does. As Greeks abroad, I believe that we want to remember our liberation and the pain suffered by those involved. This keeps us human, this keeps us whole.
Each year, the Greek community of Vancouver, like other communities around the world, celebrate our Independence Day. This year is no different. On Friday, March 25, the Hellenic Community of Vancouver and Hellenic Canadian Congress of British Columbia, will host a special performance by Yiannis Simonides to commemorate the 190th anniversary of our independence. Mr. Simonides will present in both Greek and English, so those like me will understand and relish in every word. He will read exerpts from the memoirs of General Makriyiannis, legendary military leader and politician and one of the most important and influential Greek literary figures of the last two centuries. Admission is free and everyone is welcome.
On March 25, in Vancouver and abroad we remember events that we took no part of, had no experience, taste or touch for and yet, we will feel it as if it was a passage of our own lives.