GRNews
GreekReporter.comUSAGiving from the Heart: The Philanthropy of George D. Behrakis

Giving from the Heart: The Philanthropy of George D. Behrakis 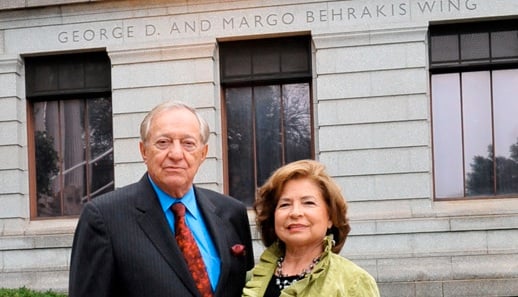 The feeling stuck with him over an illustrious 40-year career in the pharmaceutical industry (from his early days at Johnson & Johnson to the start of several companies of his own), and when he retired officially from business at 60 (he’s now 76), he began an exhaustive career of philanthropy that has enriched many fields.

In the sciences and education, he and his wife Margo have established chairs and scholarships at a number of universities and medical facilities, including his alma mater of Northeastern, where he endowed the George D. Behrakis Chair in the Field of Targeted Pharmaceuticals and funded the construction of the George D. Behrakis Health Sciences Center. He’s also funded the George D. Behrakis Hellenic Fellowship in Respiratory Allergy at the Johns Hopkins Asthma and Allergy Center, and many others at Tufts University, Brigham & Women’s Hospital, Saints Medical Center in his hometown of Lowell, Massachusetts and chairs at the University of Mississippi, Hellenic College, Boston College, Bentley College and Merrimack College.

He also sponsors fellowships to Harvard for Greek physicians.

“I bring one or two cardiologists a year from Thessaloniki to Harvard and the Women’s Hospital to spend a year or two in research,” he says. “And every couple of years I sponsor two more. And the people at Harvard are ecstatic. The professors here tell me, George, you brought us the cream of the crop. These kids write papers that are published in the most prestigious medical journals in the United States. I’m very proud of them. They’re very motivated. And what I want is for them to go back to Greece and be able to contribute.”

In the arts, he and his wife are equally generous. Most prominently their donations have reached $25 million to Boston’s Museum of Fine Arts and the museum has named its Art of the Ancient World wing in their honor.

“We have the largest collection of Greek vases of any other museum,” he says proudly. “It’s spectacular. And I wanted to make sure there was a Greek name at the galleries.” He’s known for his fundraising prowess, but he admits, “I couldn’t recruit anybody else, so I said, I’m doing it; I don’t need you guys. You’re worth that much money, come on, give something for your parents or grandparents.”

Which comes down to his equally-devoted philanthropy to the community and to his heritage. From serving on the board of his hometown church in Lowell, to publishing the Hellenic Voice, to leading the Leadership 100 and now serving as chairman emeritus, to serving as an archon of the Ecumenical Patriarchate, to establishing along with Metropolitan Methodios the nearly 300-acre St. Methodios Faith and Heritage Center summer and winter camp in Hopkinton, New Hampshire for the Boston metropolis, which hosts hundreds of campers throughout the year.

“We have close to 800 Greek kids coming down, for a six-week period, and when we first started we were lucky to have 200,” he says. “And we have 30-40 college kids who volunteer to serve as counselor, all Greek. And those 30-40 kids know each other now, get together now, and they meet in Boston, if they’re in college, they’ll meet on the weekend, and these people never knew each other before. This is what you want. You want the Greek kids to get to know the other Greek kids, like we did: I grew up in the Greek section of Lowell and I thought we were all Greek. Everywhere we went there had to be five or six of us together. We didn’t know what a xeno was. We need to bring the new generation back into the fold and I think the camp, for one, has been a great thing.”

It seems everything he does he considers a great thing, because he says, “I’m the type of person that if I’m going to get involved, I get involved 100%. I not only volunteer, I give. As the Greeks say, eimouna tiheros.”

His luck began when his father Drakoulis immigrated from Mani, met his mother Stavroula, also from Mani, and they started a family in Lowell. Behrakis and all his siblings went to the Hellenic American Academy there (as did his kids—“I wanted them to learn the language”) and he went on to pharmacy school and a master’s in biochemistry, before he was drafted into the Army. When he came out in 1959, he went to work at McNeil Labs for Johnson & Johnson (including the development of Tylenol—“You may have heard of it?”) But after nine years he got restless.

“I realized that I could do it myself: I didn’t need to give my talent to a company. So I started my first company (Dooner Laboratories) and sold it nine years later. Then I got into the eye business (Muro Pharmaceuticals) and started to make eye products that I sold to Bausch & Lomb. Then I went into asthma (with Muro), and after a number of years I sold it but stayed on the board for a number of years and that was it.”

But he enjoyed every minute of it and he was very good at it. “In school I was good in manufacturing and I was good in research. And by mixing marketing and research you know exactly what the next major problem is going to be for the next 15-20 years, so you know which product to target and try to make.”

For example, he discovered that asthma was a growing trend. “It was increasing 16 percent a year and the young children were getting asthma because of the environment. Even now in this country we have a very large asthma population. So I started researching asthma and emphysema and bronchitis and also allergic rhinitis. I started working on spray steroids for the nose and the mouth and I made a number of products and built up a sales force of 200 salesmen and went from there.”

And the government regulation of the industry didn’t faze him. “A lot of regulations by the government,” he admits, “a lot of compliance issues and regulation issues, but I never had trouble, because I tried to do it the right way. I didn’t want my name to be blemished in any way.”

In 2000, he was supposed to officially retire from the industry which he had helped transform. And he did—but then his other career began in earnest.

“What are you going to do, watch television, play golf all day?” he says. “You’ve got to use your brain.”

And he’s done so tirelessly (what retirement?), eager to share his knowledge and commitment with the new generation both in his field and in the community.

“Right now my focus is on working with physicians in Greece and the government: they recently passed a law about smoking in public places and I’ve been involved with that with my cousin, Panagiotis Behrakis, who’s a physician in Greece. In Greece we have over 20,000 kids starting to smoke at age 11. And we’ve been trying to curtail that and make sure they don’t start, because we’re going to have a catastrophe in 30-40 years. These kids will have lung cancer and some form of cancer starting if they start smoking at 11.”
In the community, he’s a firm believer in the mission of L100. “The Leadership to me was something our forebears should have done a long time ago, but they didn’t have the resources. Now most of the Greeks are successful and are entrepreneurs or professionals, whether they’re doctors, lawyers, pharmacists, dentists. We now have a large number and the most important thing is to build a leadership and people involved as a group and that way we have strength: we can do things that we couldn’t do before.”

He says he’d like to see the membership of L100 at least double (from the current 860) and he believes it will. “It’s going to happen. I believe so. With the good people we have and the young people coming on the board who have energy and are aggressive I think can we continue to build and bring the youth in through organizations like Leadership.”

His own family has steadily grown and now includes nine grandchildren. Of his four kids, Drake works in real estate, Elena is an artist and teacher, Joanna was an accountant and now teaches music, and Stephanie runs the family foundation. His wife Margo is very much a partner in the Behrakis philanthropy and they will celebrate their golden wedding anniversary this July (“We met at a Greek dance in Watertown, Massachusetts”).

“I’m not going to BS people,” says the plainspoken self-made man who has made himself the angel of many causes. “If I want to give, I give from my heart. My family, and my wife, that’s the way they think, too.”