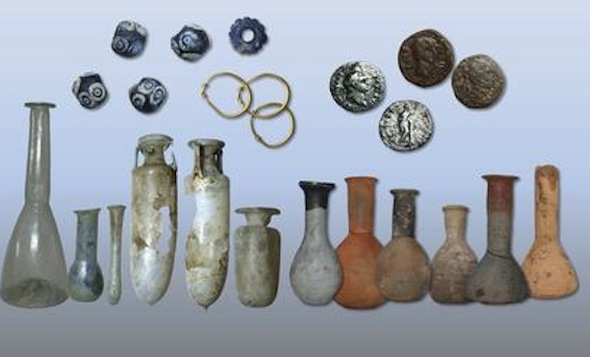 Among the highlights of the newly discovered church was the mosaic floor uncovered when structures of the later basilica were removed. This was showed a white field with a clematis theme, dominated by a phoenix with a halo and 13 rays in the centre. On either side are a number of birds, of which seven still survive, two of the right and five on the left.
Archaeologist surmise that there were originally 12 birds, six on either side of the phoenix, and that the picture allegorically represents Christ and the 12 apostles. The mosaic is unique in Thessaloniki and is dated sometime toward the end of the 4th and start of the 5th centuries A.D.
The small, one-room church was converted into a larger basilica in the 5th century, paved in marble, its naves separated by collonades and its walls decorated with marble panels and murals. In the 7th century the church suffered extensive damage and was poorly renovated, while it was finally abandoned in the 8th to 9th century.
According to archaeologist Melina Paisidou, who announced the find at the 24th Meeting for Archaeological Work in Macedonia and Thrace, the church’s position and very early age, as well as its duration and renovations, place it among the most important Early Christian churches of the city and its foundation may well be linked with one of the city’s martyrs. She said that a site north of the school of theology was being considered in order to transfer the monument.
Other finds unearthed during construction of the metro include a richly carved Roman-era marble sarcophagus and the base of what was probably a storage area.
(source: ana-mpa)