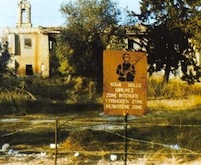 Authorities in the breakaway Turkish Cypriot north on Saturday, detained some members of the European Parliament who had gone there to make a survey of destroyed sites of cultural heritage.
Greek Cypriot MEP Eleni Theocharous, a member of the group, told Cyprus’ state radio that the parliament members were apprehended while visiting cultural sites near the fenced-off ghost town of Varosha, under Turkish Cypriot control since 1974.
She said the men in the nine-member group were taken away and the women were brought to a local police station.
Her conversation was broken abruptly.
The Cypriot Foreign Ministry said European Parliament President Jerzy Burzek and the United Nations have been asked to intervene for the release of the parliament members.
The incident is bound to cause further friction between the European Parliament and Turkey, following the recent passage of a report criticizing Ankara for its actions in the eastern Mediterranean island and its failure to extend recognition to Cyprus, an EU member state.
Turkish Prime Minister Recep Tayyip Erdogan labeled the report unbalanced, also calling unbalanced those who had drafted it.