On March 9, Governor Pat Quinn signed legislation to end the death penalty in Illinois. In attendance was Bishop Demetrios of Mokissos, Chancellor of the Greek Orthodox Metropolis of Chicago, and spiritual advisor to the last prisoner executed in the state. Bishop Demetrios praised the decision of the Governor to sign the bill and commute the remaining sentences of 15 death-row inmates as a victory for all Illinois citizens and a major moral accomplishment. 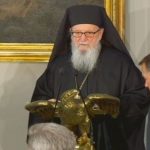 “This is not only a political and legal achievement, but a spiritual triumph of the conscience for all those opposed to capital punishment,” His Grace said in a statement.

Bishop Demetrios is a staunch advocate for abolition of the death penalty, and has worked tirelessly in this effort. He was spiritual advisor to Andrew Kokaraleis, the last prisoner executed in1999. Following Kokaraleis’ execution, Bishop Demetrios became more active in the movement to end the death penalty. He has served as President of the Illinois Coalition to Abolish the Death Penalty and is still a member.

Following Kokaraleis’ execution, and well-publicized exonerations of death-row prisoners, Governor Ryan announced a moratorium on the death penalty and commuted many sentences. The moratorium continued under Gov. Blagojevich. Bishop Demetrios has remained active in the effort to make the moratorium permanent. Now that effort moves forward.

The bishop praised Gov. Quinn. “On behalf of the leader of the Greek Orthodox Metropolis of Chicago, Metropolitan Iakovos, and all our faithful, we may give thanks for this major change in public policy.Yet the struggle for justice and the sanctity of all life is not over. Illinois is just one of 16 states that have abolished the death penalty, so there is much work yet to be done in our nation and, indeed, around the world.”  He noted that the Metropolis of Chicago spans six Midwestern states, and he pledged to continue working for abolition, specifically in Indiana and Missouri, “so that along with Illinois, Wisconsin, Iowa and Minnesota, every state where we have parishes will be death-penalty free.”