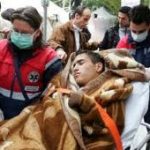 With an announcement issued on Clean Monday, the Health Ministry estimates that the worsening of the weather in combination with the deterioration of the health of immigrants on a hunger strike, are imposing the transportation of all without exception and delays to NHS hospitals, via EKAB, to offer them the required health services.
The director of the 1st Health Region, Aris Mousionis, has repeatedly asked the strikers at Hypatia to accept the transfer to public hospitals, but the request has not been accepted so far. He is also asking for the assistance of the Solidarity Committee in order to persuade the immigrants to go to hospitals, always in the name of the priceless value of human life, which is non-negotiable.
At the same time, more than 100 immigrants on hunger strike from Hypatia and the Labour Centre of Thessaloniki are being treated in hospitals with arrhythmias, cardiac disorders and peritonitis. Forty-two days after the start of the hunger strike, the Solidarity Committee and the attending doctors, complain that the strikers are fed by force in the hospitals and with inadequate and dangerous food for their situation.
The attending doctors at Hypatia recommend only thin rice or vermicelli, slowly throughout the day, so the body can respond after several days of hunger strike, while the Solidarity Committee calls for new proposals for a way out by the government.