He Lost His Wife, Remarried, Lost His Church and Faith – Defrocked 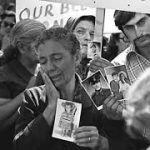 Protopresbyter Basil Papanikolaou served the Greek Church honorably and diligently as a priest for 48 years, including 30 at the parish of St. George here. His presbytera died after a long battle with cancer 10 years ago, making him a widower. Today he is not Fr. Basil Papanikolaou, but simply Basil Papanikolaou, because a year ago he remarried, to a Greek Orthodox woman who was also a widow, a violation of the Church’s canons and regulations, which made him automatically defrocked. He said he attempted for many years to communicate with the hierarchy hoping for a possible solution out of leniency but to no avail. His own Metropolitan Iakovos of Chicago told him, “You know the canons, it cannot be done.” Archbishop Demetrios of America and Ecumenical Patriarch Bartholomew did not reply to Iakovos, Fr. Basil told The National Herald, although Metropolitan Philip of the Antiochian Orthodox Archdiocese of America has silently allowed widower priests to remarry in his Archdiocese.