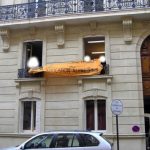 Greek students in Paris that infuriated Theodoros Pangalos last week, occupied the Greek Consulate for one hour and consigned a resolution of support for the immigrants hunger strikers of Athens and Thessaloniki. According to the Press Officer of the Greek Consulate in Paris, Mr. Aravantinos, a group of 25 Greek students entered the Consulate at 10:00 a.m. They stayed for one hour, discussed with the General Consul, Mrs. Aikaterini Koika and left peacefully. They also compiled a text, where they stated that they ask for the legalization of the 300 immigrants hunger strikers and for the settlement of undocumented immigrants. They also demanded the abolition of Dublin II regulation, which “puts human lives in danger” and “makes entire countries look like storage spaces”.