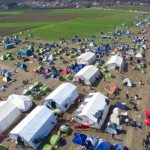 Maria Callas is one of the most renowned soprano and opera singers of the 20th century; a femme fatal with a wide-ranging voice and great dramatic gifts who became a real legend. Her artistic achievements were such that she was called the “The Bible of Opera”. She established her career in the 1950’s in Milan, at Italy’s most prestigious opera house, Teatro alla Scala.
The Athens Concert Hall is celebrating the anniversary of its 20 years of service. In the memorandum of cultural cooperation between the Concert Hall and Milan’s “La Scala” opera house, a major exhibition on Maria Callas and her historical appearances in La Scala, is planned as a parallel event to the performances of Donizetti’s opera “Maria Stuarda” from March to May.
Coined “Maria Callas and La Scala”, this exhibition includes a large number of rare costumes worn by Callas in her great operatic roles, as well as photographs, objects, videos and original recordings of her performances. There will also be a section dedicated to the history of La Scala, the centre of the opera world. This prestigious material has never been presented outside Italy.

Giorgos Hatziparaskos, an 86-year-old baker from Crete, is one of the last people who creates the iconic Greek phyllo dough by hand.
Culture