European economists Warn Greece May Have to Quit Euro 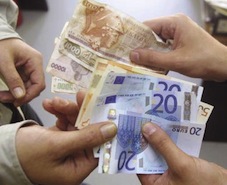 Greece’s debts are rising rapidly despite radical austerity measures. Now a group of leading European economists has warned that creditors might have to write off more than 30 percent of their loans. Greece might even have to reintroduce the drachma to overcome its debt crisis, they argue.
The European Economic Advisory Group (EEAG), a group of leading European economists, has warned that Greece may need another bailout by 2013 at the latest.
Greece’s current savings program won’t suffice to cope with its debt problems, the EEAG said in a new report which was published Tuesday. Greece is unlikely to be in a position to refinance itself via the financial markets once the current rescue package runs out, the economists said.
The Greek government has so far stressed that it will “pay back every cent” and will start reducing its debts in 2014 at the latest.
The EEAG recommends drastic steps to prevent the EU from having to provide Greece with long-term aid: Greece should either return to its national currency, the drachma, or launch even tougher austerity measures, including general cuts in wages and salaries.

According to a Süddeutsche Zeitung article published on Tuesday, leading banks are already giving up hope that Greece will be able to pay back all its debts. Thomas Mirow, the head of the European Bank for Reconstruction and Development, believes a Greek debt restructuring is unavoidable.
“It is doubtful that Greece will be able to bear a debt ratio of more than 150 percent over the long term,” Mirow told the Süddeutsche. “The markets have been pricing in a debt restructuring for some time. The ratio should be lowered to 100 percent so that the country can overcome its problems.” That would mean creditors would have to forego more than 30 percent of their loans.
(source: spiegel)