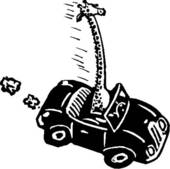 I always believed driving is the one activity that tells all about a person. One’s personality, life perspective, emotional stability and clarity -or lack of-, it is all out there. If you believe in yourself you confidently hold the wheel with both hands and carefully examine the other drivers at the traffic lights. If single, you are checking them out, otherwise, you are just plain curious and blatand enough to show it.

Drivers around the globe express their inner selves and reveal their deepest secrets while driving, whether or not they are aware of it. Greek drivers, however, take it to a whole new level. If they are mad at their spouse, they won’t hesitate to take their anger to the streets by beeping away at every opportunity the get. The beeping escalates to louder, more suddent and much longer lasting beeps, if the driver hasn’t been getting any lately. If they accelerate and fly by you at the most unexpected and/or inconvenient time, then they get extra gratification points. Anger needs to get out there and difused.

Don’t get me wrong, American drivers get the same urge to drive away their anger and sorrow. However, they tend to feel slightly more self-conscious about it. For example, they will give you a warning before overtaking you and it won’t be as dramatic as right on the sharpest turn, a glimpse of a second before the truck on the opposite side drives by. Plus the whole rolled-up windows-air-conditioning on thing makes any potential cursing/shouting irrelevant. Make no mistake though, a Greek driver will roll down the window before shouting obscenities or making a strange come-on.