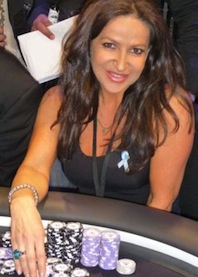 While residents of flood ravaged Queensland have been dealt a particularly bad hand in recent weeks, Kate Giouzellis (photo) has cashed the chips from her lucky poker hand into flood relief funds.
Giouzellis was the winner of the Crown Aussie Millions poker charity fundraiser two Wednesdays ago, which saw poker enthusiasts, celebrities and high rollers turning their sport into charity.
The tournament raised just under $50,000, Media Relations Manager for Crown Gaming and Corporate Natasha Stipanov said.
“Any other money raised from the night ‘Celebrity Poker Challenge’, will be donated to The Shane Warne Foundation who will then work with Variety – The Children’s Charity, to assist children who have been affected by the Queensland Flood Disaster,” Ms. Stipanov said.
The Variety club will identify the flood damage to special schools and primary schools in the affected areas and then work with the schools to look at replacing playgrounds etc.
Variety will also identify children who have lost items such as bikes, wheelchairs, walking frames and any other similar items, Ms. Stipanov said.
The Texas Hold ‘Em charity event, held each year in Melbourne’s Crown Casino’s studio 3, is the introduction to the high stakes Crown Aussie Millions tournament, one of the biggest poker events in the world.
(source: neos kosmos)

Growing up Greek-American you are privy to a unique childhood, filled with some pretty strange customs (strange to those who are not Greek, anyway).
Greece

The impressions had been made by hominids on Crete 5.6 million years ago, making them by far the oldest footprints ever discovered in Europe.
Animals