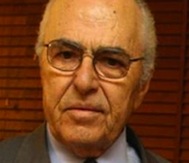 Greek shipping titan Vassilis Constantakopoulos died today at the age of seventy-five. Known as “Captain Vassilis” within Greece’s maritime world, the founder of the box ship company Costamare and chairman of the Hellenic Marine Environment Protection Association, reportedly died in the early hours of the morning in Athens.  Born in Messinia, a region of the Peloponnese in mainland Greece, Constantakopoulos was a rarity in a sector dominated by shipowning families hailing from a handful of Greek islands. He joined the Greek merchant marine in 1953 and bought his first ship in 1974, the year he founded Costamare. The company, which today owns 51 box ships, was listed on NYSE in November last year. Costamare was the first Greek shipping company to co-operate with COSCO and was involved in the Chinese container giant’s takeover of part of a Piraeus box terminal. Constantakopoulos is survived by his wife Karmen and his sons Kostis, to whom he passed on the running of Costamare in 2006 – Achilleas and Christos.