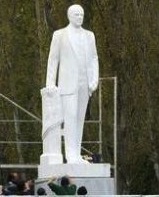 A statue of the late statesman Constantine Karamanlis, the founder of the New Democracy (ND) party, was unveiled at Thessaloniki’s seafront promenade on Monday.
Speaking at the ceremony, main opposition ND leader Antonis Samaras referred to Karamanlis’ work and legacy.  He underlined that: “Constantine Karamanlis started out as an innovative statesman, then became a leader of the nation and today is a symbol.”
Representing the government, Defence Minister Evangelos Venizelos pointed out that aside from being a symbol of unity, Constantine Karamanlis was the leader of the main opposition party for decades.
“Karamanlis knew that when the democratic political culture is not honoured and built then the consequences will burden the country,” Venizelos stated.  He added that the place where the statue was erected is permanent.
Controversy had flared recently over the placement of the statue at the city’s seafront promenade, with the new mayor objecting to the location selected by the preceding mayor.
(source: ana-mpa)