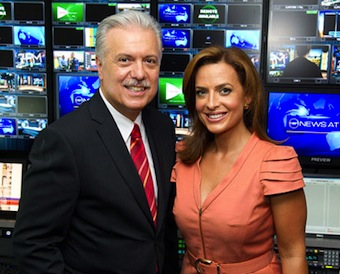 Greek -Australian news readers George Donikian and Helen Kapalos (photo) are teaming up to co-anchor the five o’clock news as part of a channel Ten news revamp.
Starting from January 24th, Donikian and Kapalos will co-host an hour of news from 5 p.m., followed by a half hour current affair program hosted by George Negus at 6 p.m., local news with channel Ten veteran Mal Walden at 6:30 p.m. and then the entertainment current affairs program The 7pm project.
The news presenters, who have worked together on shorter stints in the past said their on-air chemistry makes them a winning duo.
“We genuinely like one another and I think when we’ve got that respect and you’re with a colleague it’s almost like an aspirational relationship,” Kapalos told .
“George wants me be the best I can be, and I want the same for him, she said, adding “it is like a marriage, my boss told me when I first started there’ll be days when your co-anchor is in a bad mood and you’re there to lift them up”.
Nicknamed “hurricane Helen” for her indefatigable nature, Kapalos said consistency is vital to being a good news presenter.
“The most difficult thing is keeping that energy for 5pm”.
The onscreen duo said their chemistry most definitely comes from being Greek.
“We try not to distance ourselves from anyone but we do have great chats during the day often,” Kapalos said.
“I love that we’re both Greeks, for me, having come down here from Newcastle and Sydney, the Greeks in Melbourne just lift your spirits,” she said.
Asked if the teaming of two Greeks on a prime time commercial news program was revolutionary, Donikian responded “it’s not just revolutionary, this is the first in the world”.
It hasn’t always been an easy road, Kapalos said. “People wanted me to change my Greek name when I first started. I was too old, not small enough, I was subjected to all of those stereotypes”.
Donikian encountered a similar struggle. “I was told I could be George White, Brown, Black, any colour, but having an ‘ethnic’ name, they didn’t want.”
Kapalos said covering the Athens Olympics was her biggest breakthrough. “Nothing was going to stop me going there. I had such a focus and an intent to cover the story, even though channel Nine told me there hadn’t been a woman sent overseas for 20 years,” she said, adding “I’m a female but I’m a reporter; I’m not a dolly-bird”.
Donikian is enthusiastic about channel Ten’s new venture. “We’re calling it a revolution, it’s exciting, and Helen’s going to lead the five o’clock news in a way no one has ever seen before,” Donikian said. “I’m thrilled that I can finally come out of the shadows, I have an identity here, and it’s a Hellenic identity”.
Kapalos said she feels “buoyed” by her Greek identity.
“It gives me such a sense of pride, I feel like I inherited this huge Greek family in Melbourne,” she said. “It’s awesome, I love it.”.
(source: neos kosmos)