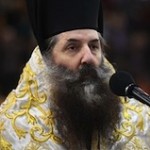 The anti-Semitic statements of Metropolitan Seraphim of Piraeus caused a lot of reactions and disappointed in the Greek Orthodox community of America. In an interview on Mega TV in Greece, Metropolitan Seraphim of Piraeus blamed Jews for orchestrating the Holocaust and accused “world Zionism” of a conspiracy to enslave Greece and the Orthodox Church. The bishop also charged Jewish bankers with controlling international finance.

The Greek Archdiocese renounced the statements of the Metropolitan, as it considers them extremely offensive and completely rejectable. The Supreme President of AHEPA (American Hellenic Educational Progressive Association) Nick Karakostas, renounced the above mentioned statements and characterized them disgraceful, fanatic and unacceptable.