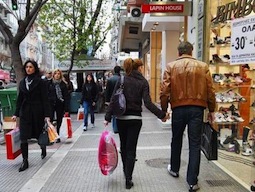 Twice as many Greeks as last year say they have no additional income to spend over the holiday period, Kathimerini reported, citing a survey of consumption patterns by MasterCard Inc.
The number of Greeks reporting no additional holiday income is 24 percent compared to 12 percent in 2009, the newspaper said. The proportion of the 1,727 Greeks surveyed telling MasterCard they were spending additional income on gifts fell from 46 percent last year to 29 percent this year, Kathimerini said.
Austerity measures introduced as conditions for a 110 billion-euro ($144.5 billion) bailout from the European Union and International Monetary Fund in May included scrapping December bonuses equal to one month’s salary for Greek public employees and pensioners.