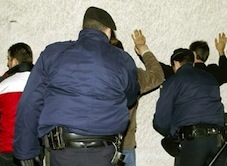 Police in Greece on Monday arrested nine people, including a Frenchman, suspected of smuggling drugs into the country from Canada, officials said.
The arrests in Athens and the town of Astros in the southern Peloponnese peninsula, some 170 kilometres (106 miles) from the capital, came after a tipoff from the US-based Drug Enforcement Agency (DEA), police said.
The presumed leader of the gang, a Greek-Canadian, had been tailed by police before his arrest on Friday.
The subsequent capture of the remaining gang members, aged 34 to 42, “fully” dismantled the criminal organisation, the police said in a statement.
Police confiscated 2.4 kilogrammes (5.3 pounds) of cocaine and 18.4 kilogrammes of cannabis in addition to some 7,000 ecstasy pills.
The sum of 251,000 euros (331,000 dollars) in cash was also seized while police said the suspects had an additional 38,000 euros in bank savings books.
They also found an M-16 assault rifle, two nine-millimetre handguns, bullets and two kilogrammes of dynamite.
The detained, who are also suspected of money laundering, were allegedly planning to sell the drugs in the greater Athens area, the central Peloponnese and the island of Crete.