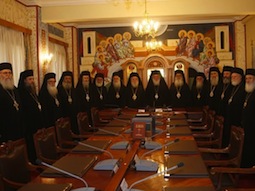 The Orthodox Church has denounced the lack of leadership and the moral sense that, by means of the crisis, has made Greece a country ”under occupation”.  It ”carries out the orders of its creditors” from the IMF and the EU which ”appears to have lost its independence.” In a message to worshippers to be distributed on Sunday in all churches, the Holy Synod harshly criticises the country’s ”ruling class”, a general term which appears to include the previous centre-right government, as well as the current government under George Papandreou. According to the Bishops, it is not the state itself that is to blame for the current crisis but the political leadership.  The leadership has not been able to modernise and is interested only in power.  It ”has not been able to speak the language of the truth.” And it is has transformed itself into an agent of the creditors, imposing ”radical changes that only a short while ago would have disgusted Greece and which on the other hand has caused almost no reaction.” And this situation, according to the Synod, puts the real interests of the country and its people at risk, allowing them in fact to be governed by our creditors.  The Synod points out that according to many economists, the global crisis ”is an artificial and instrumental crisis that aims to all the world to be controlled by non-philanthropic forces.”  The Church denounces a moral impoverishment of society which, attracted only by easy wealth and wellbeing, has lived irresponsibly, moving away from the truth of things. It is ”contributing to the current crisis through selfish requests without control by the various sectors involved.”  The Bishops conclude by urging the people to take advantage of the crisis to rediscover ”the strength and love” needed in the ”toughest moments”, offering solidarity to those in need to exit this difficult situation together and with the Church.