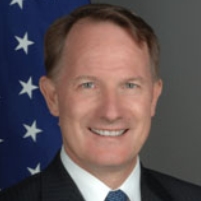 New U.S. Ambassador to Greece Daniel Bennett Smith on Thursday held his first press briefing for local reporters.  He responded to a variety of questions dealing with the economic crisis in Greece, bilateral relations and regional issues of heightened importance to Athens and Washington.  The Ambassador also addressed the “Wikileaks spectre” looming over America’s foreign relations.
Smith referred at several times to the debt crisis and economic recession battering Greece, pointing to investments, either FDIs or internal investment, as imperative to jump starting growth in the eastern Mediterranean nation.
“We do think that this government (Greek) is on the right path,” he said, while emphasising the importance of restoring confidence in the country among international capital markets.
The veteran U.S. Foreign Service Diplomat, speaking amid labour union strikes and mobilisations around the country, noted: “we recognise that this (austerity package) is also creating a lot of pain”.
(source: ana-mpa)

The 1821 Greek Revolution Comes to Life on Public Buildings