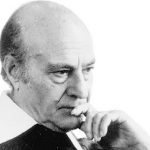 2011 will be dedicated to the Nobel Laureate, Greek poet Odysseus Elytis.  It was announced today by the Board of the National Book Center (EKEBI) and the Minister of Culture and Tourism, P. Geroulanos, on the centenary of his birth.
Geroulanos stated today at the EKEBI press conference that it is the least Greece can do for an author who has travelled to every corner of the world.  He referred to the initiative of the President of the Hellenic Republic to hold a reading contest for students under his auspices.
Several important news announcements were announced to journalists who attended the meeting of the Minister of Culture with EKEBI. In this meeting, the new EKEBI announced its strategy on the promotion of reading that is focused on children and adolescents. Among the future steps planned, close collaboration with the Ministry of Education and Lifelong Learning, encouragement for the production of literature programs aimed at children by Greece’s National Broadcasting Station (ERT), the expansion of Reading Clubs in School Libraries and the establishment of a special permanent space for teenager and children’s literature are included.
This year for the first time, the Greek National Book Center is planning to conduct a survey on the reading behavior of adolescents and will announce its results in 2011.