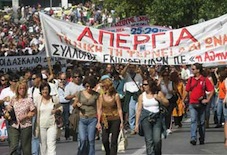 Today the discussion began between the government and the unions on the contested labour reform contained in a draft law that will arrive in Greek Parliament tomorrow.
The discussion started off in a climate of intense unrest, with a series of strikes.  The strikes begin with a 6-hour work stoppage today by public transport workers, which will culminate with a demonstration in front of the Transport Ministry.
To protest the reform, which involves both workers in the private and public sector, public transport workers will also strike tomorrow for 24 hours, together with workers in the Attica region, who will strike for 3 hours, and workers in the bank sector, who have called a 48 hour strike.
Protests will peak on Wednesday, when the main labour unions from the public and private sector have called a 24 hour general strike. Flights will be grounded and all state services, including garbage collection, disrupted.
“No plane will fly on Wednesday,” Yannis Kourmoulakis, secretary general of the air traffic controllers’ union, told Reuters. “These measures are hurting us, we won’t be able to make ends meet.”
On Thursday, public transport workers will have another work stoppage that will last for 24 hours.