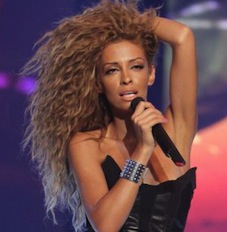 Eleni Foureira (participant in the 2010 Greek national final along with Manos Pyrovolakis) is receiveing a personal attack by the Greek media. With both parents been Greek (from Ioannina and Athens) her descent is from Mexico. This is what she told to STAR Channel’s Axizei na to Zeis with Tatiana Stefanidou.
There are many though who claim that she is descent from Albania. Those rumors also claim that recently Eleni Foureira asked from the Greek authorities to receive the Greek citizenship. There is no confirmation or denial of the info above.
Eleni Foureira responded that she is not interested to such stories and that she is so busy with her projects having no time even to laugh with them. Why this story is breaking out now? Because two days ago ERT confirmed Eurovision 2011 participation and the broadcaster already approached Universal record label and discussed the name of Eleni for the 2011 Greek national final.
(source: oikotimes)

In Canada, pizza aficionados have to thank four Greek immigrants for the country’s own unique pizza, known as Regina Pizza.
Business