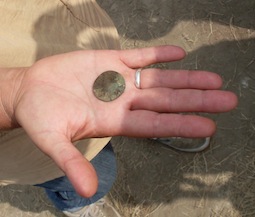 Researchers at McMaster University in Hamilton have launched a research project where nuclear radiation is used to identify changes in the metal content of ancient Greek and Roman coins held in a world-class collection.  The collection has been with the university since the 1940s.
By probing the metal content of coins exchanged thousands of years ago in Mediterranean Europe, scientists have discovered a new way to map ancient trade patterns, to retrace economic ups and downs at the dawn of Western Civilization and even to shed new light on the collapse of the Roman Empire.
“As we determine what the coins are made of, we are then able to reconstruct ancient trade routes, understand the development of economies and even determine the extent of counterfeiting,” McMaster archeologist Dr. Spencer Pope stated in a project summary issued Tuesday. “This research will help us link the archeological to the historical to understand how we, as a society, got to where we are today.”
A joint project between the University’s Classics Department and its Department of Medical Physics and Applied Radiation Sciences, the ancient coin initiative involves x-ray analysis and a “proton microprobe” to determine how much silver, bronze or gold is contained in each piece of money.
“We use multiple systems to look for a number of metals — gold, copper, silver — present in the outer layer of the coins,” said radiation scientist Michael Farquharson. “Then we use the McMaster Nuclear Reactor to penetrate deeper into the coin to determine whether or not the coin was plated with a different material than it was actually made of.”
“For the Roman period, there are many crises that can be recognized in the numismatic record,” said Pope, describing one “budget crunch” during Punic Wars of the 3rd century B.C., when Rome was battling Carthage — centred in present-day Tunisia — for control of the Mediterranean world.
“We can see metal coins begin to have more base metal — junk metal — added to ‘debase’ the coins,” he noted. “As Rome and other cities fall into crises and get into economic trouble, more bronze coins appear (rather than silver), and even these are diluted by tin or lead.” So far, about 20 coins have undergone this “deep probe”.
Pope hopes the research team will be able to achieve enough precision in its analysis to reliably identify the geographic sources of the metals for each coin and become a global centre of excellence for such investigations. For example, the silver mine on the Greek island of Siphons, located in the Aegean Sea between Greece and Turkey, was known to be a major metal source. There was another major mining operation near Athens.
Trace elements found in each coin can help pinpoint its geographic and geological origins, allowing the team to better understand where Greek city-states turned for metal supplies and how widely coins were circulated. This should help scholars “get at the heart of the development of the Greek city-state” and use findings about metal supplies to determine the degree of each city’s economic self-sufficiency or whether it was “grasping at available resources.”
Plans for another 100-coin study to expand the database of information are planned which should help researchers begin drawing more detailed conclusions about the economy of the ancient world.