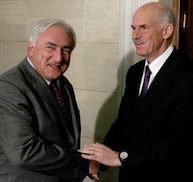 Greece needs to restore growth, IMF chief Dominique Strauss-Kahn said Tuesday.  This statement comes months after the EU and IMF put together a 110-billion-euro (148-billion-dollar) loan that relieved the country from bankruptcy. “What has to be done now is to restore growth,” Strauss-Kahn said at joint press conference with Greek Prime Minister George Papandreou. International Monetary Fund Chief Dominique Strauss-Kahn urged the European Union to find a comprehensive solution to the bloc’s debt crisis.
Strauss-Kahn said he understood why people were upset at the measures and why they would chant: “IMF go home.”
“But really, you’re better off with us here than with us home. And the sooner we will be able to go home, the sooner you will be able to fly alone, the better it is,” he said.
“So don’t fight against the doctor. Sometimes the doctor gives you medicine you don’t like. but even if you don’t like the medicine, the doctor is there to try to help you.”
“Very many in Greece believe we are the bad guys,” he said. “You are better with us here than out of the country.”
The IMF head also called on Greek society as a whole to support the government’s reform efforts.  The efforts have been attacked for riding over the country’s traditions and for imposing an EU-IMF solution for its problems.
The Euro zone needs a comprehensive solution to the debt crisis rocking the group.  It  must avoid a country-by-country approach, the head of the International Monetary Fund said.
“The Euro zone has to provide a comprehensive solution to this problem. The piecemeal approach is not a good one,” Dominique Strauss-Kahn told reporters after meeting Greek Prime Minister George Papandreou. 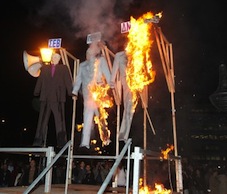 Greek pensioners protest in Athens as IMF head visits
Hundreds of Greek pensioners have protested in Athens, as the head of the International Monetary Fund arrived for loan extension talks.
“I receive 350 euros, how can I live on 350 euros? My husband has passed away and this is all I am left with. How do I survive on this?” confessed one pensioner on Tuesday’s march, which ended at the Finance Ministry.