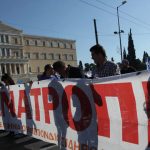 The Athens Metro, ISAP trains, trams and the Proastiakos suburban railway services will come to a 24-hour standstill on Wednesday. Employees are striking in protest of the measures the government is about to impose. Hellenic Rail (OSE) employees will also be joining in the strike in Athens that will result in the cancellation of at least 35 routes.
The Ministry’s plan in order to reduce the deficit in public utilities and organisations (DEKO), is to merge the five transport companies in Athens.  It currently operates under the umbrella OASA organisation in two companies. As a result, there will be transfers of personnel, cutbacks in workers’ remuneration through abolition of subsidies rather than salary cuts, increases in ticket prices and reduction of the state subsidy of tickets.  The reduction from the current 75% of the ticket value will be decreased by 50%.