"Zorba the Greek" Performed by Cretan Theatrical Group in Boston 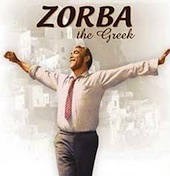 The novel “Zorba the Greek”, written by Nikos Kazantakis was presented by the theatrical group of Ierapetra Municipality in Crete.  It was preformed on Friday evening at the Maliotis Cultural Centre in Boston. The stage direction was by Antonis Diamantis. The play was under the egis of Rathamanthus-Ide Chapter of Boston and more than 200 Greeks attended.

The president of the Pancretan Association of Boston Lefteris Travayakis, thanked the theatrical group and offered commemorative gifts.

“Nikos Kazantzakis is a spirit of freedom and freedom a value that we all seek in Greece”, said stage director Antonis Diamantis.