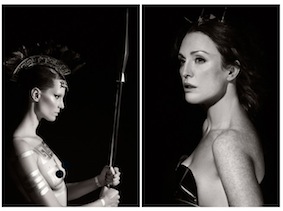 Designer Karl Lagerfeld unveiled “Mythology”.  It is the latest Pirelli calendar and was presented at the Ritz-Carlton hotel  as temperatures plummeted to 16 C. Lagerfeld photographed models in his Paris studio for the coveted calendar.   Each model posed as a different deity from ancient Rome and Greece. “I wanted to do something different. I looked at all the other calendars,” he said, adding his had a message “of timeless beauty and youth.” The calendar consists of 36 black-and-white images of 15 female models and 5 male models.  Actress Julianne Moore is also photographed as Hera, the wife of Zeus.
The calendar this year features the following models:
Lara Stone, Bianca Balti, Freja Beha Erichsen, Isabeli Fontana, Magdenlena Frackowiak, Anja Rubik, Abbey Lee Kershaw, Lakshmi Menon, Heidi Mount, Erin Wasson, Natasha Poly, Daria Werbowy, Jeneil Williams and Iris Strubegger.