They are maybe the only mother and daughter working as managers and distributors in Hollywood. Alexandra Yacovlef (daughter of Nicky Yacovlef
who was one of the biggest composers in Greece and well known in all the
high society and older crowds as he was also the biggest antique dealer) and her daughter Alexia Melocchi (half Greek, half Italian) have created Little Studio Film.  Through their exquisite work they have managed to give their creative input to many projects that have succeeded in finding financing and global distribution. Alexandra and Alexia gave us a very interesting interview talking about their work and the challenges they have faced, the changes in the film industry that happened after the crisis and also about Greek Cinema.

Tell us about Axelia International Pictures and Little Studio Films. What
is the focus of each company, how they started and what are your tasks.

Alexandra: AXELIA INTERNATIONAL PICTURES was focused on selling and
distributing American Motion Pictures worldwide.  I was doing mostly
acquisitions on
behalf of several International distributors of American Motion Pictures as
well as independent films for us to sell and represent worldwide. We
attended all major film markets from Cannes Film Festival to American Film
Market.
I was the CEO and Alexia, my daughter, was the President.

Alexia: After buying over 100 American Movies on behalf of our theatrical
international distribution clients with AXELIA INTERNATIONAL PICTURES and
also selling 25 American movies around the world to profit, created LITTLE
STUDIO FILMS with the intention of creating a bridge between International
Film Makers, Producers, Authors, and Screenwriters into Hollywood and vice
versa for the American Talent into the rest of the world.  Because of our
being pro active in our clients careers, we often get involved with their
projects in a producer or executive producer role bringing some of the
financing, co production partners, talent and/or global distribution.

How long have you been working together and how is it to work with a
person from your own family?

Alexandra : Alexia was working with me since high school.  She started as
translator for International distributors and then helped with the
acquisitions for International distributors as we were often buying over 100
films per year. We have been together for 20+ years and it is great to work
together as we have obviously the trust on each other’s actions and
decisions.

Alexia: I started to work as a translator for some of Alexandra’s
international clients, and helping out in the deal making process. Then I
decided to go pay my dues by working for a year with another Company.
There I learned everything about film sales contracts and collections on
revenues, physical film production, marketing a film and delivering it for
distribution with all the needed elements. Joining AXELIA INTERNATIONAL and
then starting LITTLE STUDIO FILMS with my mother was a natural evolution. We
are best friends, not only family, and we complement one another. She is
very much of a Studio, big movies mentality and she is very direct in her
dealings. I am the nurturing type who oversees the high level independent
films (that may end up having a Studio Release) and dealing with the Talent
who are all very sensitive and therefore need a white glove treatment.

In your opinion what do you think is the secret of becoming a successful
manager and distributor? If there is one of course.

Alexandra: As a distributor- Being informed. Being in a constant
communication with people who are key in our Industry and following closely
and daily all the developments either these are in the production,
distribution and/or agencies arena. But also knowing the trends in all the
international markets, how movies perform and what actors are hot in which
country.

Alexia: As a Manager- Be brutally honest with my clients. Demand only
excellence from them. See their potential and show them the way but let them
also do the work. Don¹t knock on the doors, kick them open.
Expect loyalty. Be a great listener so you can sort out the truth from the
many lies that surround you. 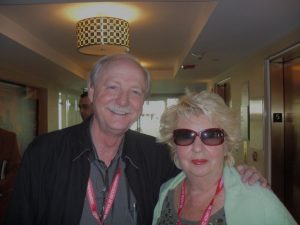 How do you usually find talents to work with? Do you approach them or
they come to you?

Alexandra : They usually come to us. We are very “closed doors” so to speak
company as we want to keep working with talent that we often consider
exceptional like some of our writers and mostly have projects and people
that we know they are not a waste of time or wannabes but people who really
intend to make it and have all the merit and plan to work on it and
contribute to the goals we jointly set and not take us for granted.

Alexia: We read ALL QUERIES.  Sometimes we find a diamond in the rough in
them and my assistants know how to spot them. It comes across  in the good
manners of those who seek us out, in  how short and effective their pitch is
and their bio/c.v .  However, as Alexandra stated, becoming our clients is a
process and we do not act on impulse or just because they are recommended
or have the credits. That¹s the reason why our clients stay with us for
years. The relationship that is developed is top notch and based on truth,
realistic expectations and mutual respect.

Tell us about your relationship with Greece and if you have ever been in
Greece.
Alexandra :We used to go to Greece every summer after Cannes as we still
have family and a house there. We have been very busy traveling to other
counties lately but we still hope to make it maybe this summer.
Alexia: My mother is Greek, my father is Italian. I started going to Greece
every summer since I was 2 months old. I absolutely love it and have very
happy memories. It’s been a few years since I have been back  as my life is
quite hectic but one day I would like to own a house in an island.

What are some of the challenges you have to face in your work?

Alexandra : Unpredictability.  We are subject to the financial markets of
the world as well as the political situations.  We are seeing countries we
did not even consider years ago like China and India that are becoming a
major
competition financially. Not for the quality of movies as Hollywood will
always be number 1.

Alexia: There are an average of 300,000 scripts going around Hollywood a
year. Very few get bought at script stage. It¹s all about packaging. There
is also a surplus of ultra low budget low quality films/scripts that just
clutter the market and stop the good ones from being
sold/produced/distributed. Also the Internet can kill revenue of a film or
increase it. It’s a double edge sword but ultimately the Digital World and
the Social Media outlets will rule this Industry very soon.

In what ways do you believe the film industry has changed after the
economic crisis?

Alexandra :When there is a crisis there are more movies being made. I think
because Movies are the cheapest form of Entertainment and people need it.

Alexia: The  economic crisis have helped the Studio system lower their
otherwise insane production budgets. It has also brought a shift towards
more uplifting material, especially family friendly. We all want to film
good if we are going to pay money for it.

Have you ever thought to get involved in a film project in Greece?

Alexandra: Sometimes but we are so taken and busy here that we have hardly
enough time to take care of our business here.

Alexia: I would love to shoot a film in Greece. I would also love to help
some Greek talent become known in the USA but before that happens there need
to be some top scripts coming from Greece (commercial) which I have yet to
see , written in the most professional way, and some film makers who are
humble and want to make films that translate for the entire world, not just
for the Greek or European community.

What do you think about the Greek Cinema today and in what ways do you
believe it could become better?

Alexandra: I grew up with the Greek Cinema of Vougiouklaki, Fotopoulos,
Vassiliadou etc the feeling good real Greek soul black and white films and
it is hard for me to relate to their Cinema today that I think has lost its
“innocence” and authenticity.  That said I know there is terrific talent in
Greece.

Alexia: See my answer on 8. I also grew up watching the Finos Film movies,
where there was song, dance, glamour and showing Greece at its best. I wish
there were more movies like MAMMA MIA, SUMMER LOVERS etc. but written and
produced and shot by Greeks.

Tell us about your upcoming projects.

Alexia: We are attached to produce and/or executive produce films in all
budgets from 1.5 Million US to 40 Million US plus. Some are : LOLA RAY, a
science fiction franchise from the comic book by the same title. THE LOST
PHARAOH, from Valerio Manfredi’s  best selling novel PHARAOH which is  high
octane archeological Da Vinci Code type adventure  (Valerio wrote the
Alexander the Great highly acclaimed novel which was set up at Universal
with Baz Lurhman to direct).
Also two family films, YOUNG DRAGONS which is a co production with China,
in the vein of the Karate Kid, and GALLEON about the discovery of a Spanish
Galleon off the coast of Florida containing a great treasure.
Then a couple of thrillers, A NOBLE LIE about a UFO Government conspiracy
upon the landing on Roswell, and SINS OF THE MIDNIGHT SONS from a published
book about a mysterious kidnapping in the desolate landscape of Alaska.
Lastly the US feature length remake of a very successful Italian horror
short film, ICE SCREAM, which won special jury mention in Venice, won many
festivals and aired on MTV Europe with great ratings.