Peter Eliades: The Greek “King” of Strip Clubs in Vegas 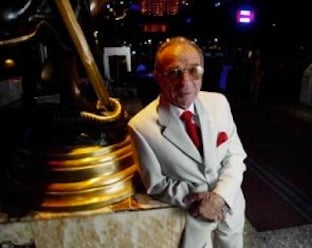 “Whatever happens in Vegas, stays in Vegas”. This popular expression doesn’t hold true for the Sapphire Club which is at this moment, the biggest strip club in the world.  It is 71,000 square meters. The Sapphire Club which was originally owned by Peter Eliades, has made a blast in Nevada at 3225 Industrial Road.  It was established in 2002.  It attracts many people from all over the world daily. The Greek businessman also owns the strip club called Olympic Gardens in Las Vegas .

The central entrance of Sapphire was $750,000 dollars to construct.  It has been built in an art-deco style. The stage is made from glass and reaches the second floor.  It weighs approximately 4,000 pounds.  The lightened letters of the marquee are suspended and projected through multicolored fiber optics in the front entrance.

“The illusion has to do with the fact that it’s more about something upgraded while it offers on the same time a different atmosphere” declared owner and ex-co-owner Dolores Eliades in a previous interview.  She is the daughter of  Eliades.  According to the police of Las Vegas there are around 5,000 declared legitimate dancers who work in Las Vegas strip clubs. Some earn one to two thousand dollars on a busy night and $800 dollars on a slower night.

“It isn’t about a place where someone will do drugs or prostitution. If some girl wants to engage in prostitution, she can do so in a whorehouse”, Peter Eliades previously stated in a dated interview.

In 2003 there were official records showing that Sapphire had 147 employees along with 2,300 dancers!  The dancers access the club from the back door and show their work permit for entry.  Their data is then confirmed by a host of the club. The police of Las Vegas can fine dancers who work without the right permit. Around 1,500 customers attend the club on Saturday nights and the entrance fee is $20. There are three bars inside. A Budweiser costs $5.50 dollars, a bottle of Dom Perignon costs $625 dollars, while cigars cost $100 dollars each!

The club dancers are freelancers who pay $105 dollars in the clubs to work there. They may be fired if they make under $60 dollars a night from the dancing they do on the stage or from lap dances. The contract they sign clearly indicates what is allowed and what is not. They are warned not to allow customers to touch their breasts or their buttocks. According to a law in 2002, the dancers are not allowed to touch the customer to places underneath his/her shoulder.

“Las Vegas was built over sex, gumbling and alcohol. At the end of the 70’s and the beginnings of 80’s, they tried to change it into a family business. Las Vegas forgets sometimes its origins” said Dolores Eliades in her interview.

Peter (Aristotelis) Eliades wasn’t always the owner of the two most famous strip clubs in Las Vegas. He began as a cook and had several other jobs in restaurants when he moved to Las Vegas from Rochester, New York in 1955.  He then worked as a cab driver spending 17 years in the streets of Las Vegas. In the 60’s he bought the taxi company Grayline. After that he became a shareholder in Yellow- Checker- Star; the most famous taxi company in Clark Country.

In 2003 there were a recorded 627,000 taxi rides in South Nevada. In 1989 there was an economic breakthrough in Las Vegas after the opening of the famous casino Mirage.  Eliades stepped in dynamically in the area and opened the Olympic Garden strip club that is 25,000 square meters.  It attracts a high number of customers daily.

In December 2002, Sapphire was successfully named as the biggest strip club in the world. It is located behind the Stardust Casino.  Sapphire is one of the most popular clubs in Las Vegas where an observer can admire a modern naked Aphrodites. Eliades’ businesses employ more than 2,500 people, not including the dancers who work contractually.  On a good night the club can generate $100,000 dollars.

However David Tallas who is the co-owner of the Sapphire, blamed Eliades for fraud. Eliades accussed Tallas that he had secret partners working for him. This conflict was brought to a local court house in January 2006 under judge Elisabeth Gonzales. Las Vegas VIPS were present at the case, such as politician Michael Mack. Tallas earned the exclusive ownership of the place, paying the noteworthy amount of 80 million dollars. Eliades left the court room with 40 miliion dollars which was 50% the amount of the auction. Some say that Eliades did it on purpose to sell Sapphire at a much higher price than the original. When he bought it in 2001 as an athletic club in the area, it was only $14.5 miliion dollars. “40 millions from an investement of 14 millions isn’t bad at all” declared Eliade’s lawyer Mark Tratos.

Before leaving the court Eliades claimed: “He may take Sapphire. No hard feelings”. Tallas on the other hand seemed troubled about the victory. In order to avoid more accusations, he was forced to reveal if secret partners really existed who turned out to be lawyers and investors from LA.

In November of 2008, the Greek bussinesman lost his wife of 54 years Janet. Today in his seventh decade of life, he remains the owner of Olympic Gardens.  He plans soon to expand the space.  He was on the board of directors of the Business Bank in Nevada for eight years. Despite the big exposure he had through his business, he keeps a low profile and has never pursued fame.