Greek-Canadian Celebrity Chef Brings Her Own Olive Oil to Canada! 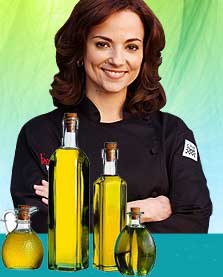 Greece is the birthplace of Christine Cushing. In Greece, residents consume almost 25 litres of olive oil per capita annually.  Natives use twice as much olive oil than any other Mediterranean countries.
Cushing is a professional chef from Toronto who became well known for her cooking shows on Food Network Canada.  Now she is bringing her own variety of Greek olive oil to Canada.
An ardent fan of using olive oils in her cooking as an essential ingredient, she now has two varieties in Canadian stores.
The original is labelled “Bold” and produced in Crete. It has a peppery finish and is the perfect dressing oil for arugula, Belgian endive and flavour-forward vegetables, she says.
“And although my mother is from Crete, I had never been there,” she says. “I was blown away by the smells of dried oregano, wild thyme that permeates everywhere and the soil is almost a purply ochre colour.
“This is reflected in the taste of the oil,” she adds.
Cushing’s most recent oil import named “Vibrant”, is organic and is from the coastal Peloponnese region of Mani on the mainland.
“It is medium-bodied, forwardly fruity, round with grassy and floral notes,” she explains.
It is perfect as a dressing for bibb or subtle lettuces and vegetables, drizzled over pasta, used in homemade mayonnaise, in dessert preparations including cookies and as a finishing oil for mild white fish.
Although both products are made from Koroneiki olives, they are distinctly different as they express the flavours of their respective terroirs.
They are being produced by a friend in Greece who is an olive oil maker.
“He and his family make super high-end oils and helped me source them. These oils, like wines, have their own personalities,” she says.
Cushing says that there is a lot of misinformation about extra-virgin olive oil in North America.
“Unlike Europe, there is no regulation to govern the quality of olive oil. There, in order to call something extra-virgin it can have no more than one per cent acidity. Bold has 0.3 per cent and Vibrant 0.5 per cent, which is very low.”
Cushing is concerned that many Canadian consumers are perplexed: “because they don’t know what a great oil should taste like and what it should cost.”
For more information on her two olive oils and where they can be purchased please visit: www.christinecushing.com/product-olive-oil.php.