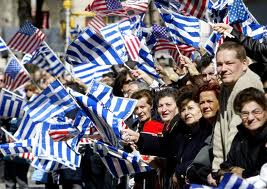 Greek-Americans are participating very actively in the United States political arena. Republican Olympia Snowe is the only member of the Senate who is of Greek origin and Democrat Shelley Berkeley is the only Greek-born woman in the US House of Representatives.  Now three young Greeks have been elected to important local level positions this term.

Aravella Simotas is a lawyer from Kelafonia, Greece.  She has been elected as the State Representative for the Democratic Party of Astoria, New York.  The Brooklyn and Staten Island areas have elected Nicole Malliotaki.

Since her teenage years, Simotas  involved herself with of the Greek Diaspora within and beyond her local community. Provoked mainly by environmental organizations, she worked with politicians in her region promoting issues of ecology, education, health and safety.  “The Greek Americans, in previous years, were not very active in the political sector and it was very difficult to be elected previously,” stated Simota to ANA-MPA.  She notes that: “In recent years Greek-American participation in the American political life has increased dramatically and not only in terms of candidacy, but also in many regions, Greeks have considerable power.”

Republican Nicole Malliotaki, who had been working in the office of former New York Governor George Pataki, won the election Tuesday for the Democratic Party for Brooklyn and Queens in New York. “It was difficult, however I had the support of many expatriates of my constituents,” said Malliotaki to ANA-MPA.  She also claimed: “It is gratifying that more and more Greek-Americans are involved in politics.”

Malliotaki’s father is from Crete and her mother was exiled from the dictatorship of Fidel Castro in Cuba. She studied economics and has worked locally in New York on many social issues.

Another Greek- American who participated in last Tuesday’s elections is lawyer Marianna Spyropoulos of Chicago.  Spyropoulos was elected to the Democratic Party of the Board of Commissioners of the Metropolitan Region for the Restoration of Water in Greater Chicago, with a six-year term. This is the biggest water control region in the world and annually manages approximately two billion U.S. dollars. Marianna Spyropoulos received positive acknowledgment from the voters of Cook County, Chicago who brought her to victory.

Marianna Spyropoulos is the daughter of Theodore Spyropoulos, Coordinator of SAE USA and the cousin of Alexis Giannoulias. She studied political science and law and has served as a prosecutor. She has worked on a research program in London and worked on research and analysis of the economics and politics of Russia and Central and Eastern European nations.