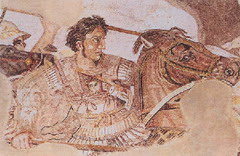 One of the most important international exhibitions presented the life and work of one of the greatest figures in world history, Alexander the Great.  It was a large exhibition that concluded last night in Kunsthalle of Leoben in Austria.
The exhibition in Leoben had  opened on March 20th and had moved to Leoben from Manheim in Germany, where it had attracted over 100.000 visitors.
Over 400 artifacts from 25 museums from all over the world were displayed.  The relics came from the Louvre, the British Museum, the Hermitage, and the national museums of Tajikistan and Afghanistan. The exhibition was organized by the Museum of Leoben in collaboration with the Museum of Manheim, the German Archaeological Institute, and the renowned Viennese Museum of History and Art.

The idea behind the exhibition and its content had been presented a day before its launch in Leoben in an international press conference for more than 50 representatives of international mass media.  Journalists were given a thorough tour of the Museum halls by the initiator and curator of the exhibition who is also the director of the Museum of Manheim, Michael Telenbach.

During the presentation, former General Director of the Museum of Art History in Vienna Wilfred Zaibel, had characterized Alexander the Great as: “One of the most important figures, if not the most important, in world history, presenting many aspects of his short but glorious history”.

Leading scientists repeatedly stressed that the campaign of the great Greek and Macedonian: “Was not so much of a military nature, but substantially cultural, a fact which is of course related to his apprenticeship to the great teacher and philosopher, Aristotle”.

The impressive long tour was filled with enthusiasm and philhellenism that Telenbach offered to the representatives of the international press.  He  repeatedly made references to the goal of Alexander the Great to unite nations, and the building of a new society of nations.  Telenbach took into account the Aristotelian idea for human equality, while he had referred to the fact that in many regions Alexander the Great passed through accepted or worshiped as a god.