GRNews
GreekReporter.comGreeceFrontex: "Greece Point of Entry for 90% of Illegal EU Crossings in...

Frontex: "Greece Point of Entry for 90% of Illegal EU Crossings in 2nd Quarter of 2010" 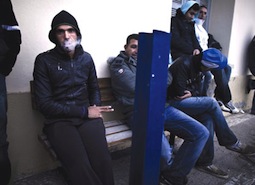 The European Union is posting 175 armed guards on the Greek-Turkish border to help halt unauthorized migration, an official announced.
The United Nations High Commissioner for Refugees has voiced concern about the crackdown, warning that “asylum needs should not be compromised,” the EU observer reported.
EU Home Affairs Commissioner Cecilia Malmstrom said Friday the deployment will begin Tuesday and run for two months.
Acting on a Greek request, the EU’s border arm Frontex, is dispatching the teams for 24-hour joint surveillance with the Greeks on a 75-mile stretch of the border where most of the migrants pass through.
They are trained to detect false documents and stolen cars, use dogs and interview illegal travelers with the aid of interpreters, the EU said.
Greece has become the main entry point to the EU for migrants and asylum-seekers from Africa and Asia.  This holds true especially for migrants from Afghanistan, since Italy and Spain have tightened security.
Frontex says Greece was the point of entry for about 90% of illegal crossings into the EU in the second quarter of 2010, compared with 65% in the first quarter.