Cavafy Honored with Museum in Plaka 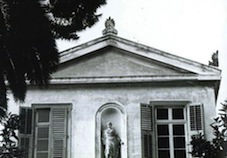 One of the greatest poets of modern Greek Constantine P. Cavafy, will be honoured with a museum in Plaka, Athens. The building which will host the museum belongs to the Ministry of Culture.  It also used to be the home of 19th century politician and first Constitutional Prime Minister of Greece, Ioannis Kolettis.
The plans for the museum were finalised after the agreement between Hellenic Postbank and the Cavafy Archive’s curator.
Hellenic Postbank’s CEO Angelo Filippides is the man who envisioned the museum two years ago.  He decided that the bank will donate one million euros for renovation work and a monthly sum of 20,000 euros for the operational costs for the next 50 years. The curator of the Cavafy Archive and Director of the Centre for Neo-Hellenic Studies Manolis Savvides, happily agreed.  The only other proposal he had for the housing of the Cavafy Archive was from Yale University in the USA. Antonis Samaras then Culture Minister and today main opposition leader, approved the plan. On Friday the 22nd of October, current Culture Minister Pavlos Geroulanos announced that the museum will open soon in the beautiful Kolettis residence, under the Acropolis.
There exists another Cavafy Museum in his homeland of Alexandria, Egypt. It opened in 1991 thanks to a donation by Thessalonikian bussinessman G. Stratigakis. The egyptian Cavafy museum is hosted at the late poet’s apartment and is under the auspice of the Cultural Section of the Greek Embassy in Alexandria.