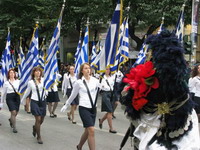 For the next three days Thessaloniki will be celebrating various Greek holidays for the month of October.  The 26th is the holiday of the city’s patron saint, Saint Demetrios and  the day of the city’s liberation and the country’s national anniversary is on October 28th.
On Tuesday the 26th, at  St. Demetrios church, there will be a ceremony to honor the saint.  Prime Minister George Papandreou, Leader of New Democracy Antonis Samaras, Minister of National Defense Evangelos Venizelos, the leadership of the Armed Forces, along with additional ministers, local authorities  and representatives of political parties will all be present.  On Thursday the 28th there will be a military parade at the city center where all of the previously mentioned including the President of the Hellenic Republic Karolos Papoulias will be present.
On Wednesday at 11:00 am there will be a student parade on Tsimiski Street. Karolos Papoulias will attend the parade.  He will also attend a parade at the memorial of the Third Army Corps and at 10:30 he will lay a wreath. In the evening there will be an inauguration at the First International Exhibition of Defense and Security (DEFENCYS 2010) at the John Vellidis Convention Center where the festivities will end.