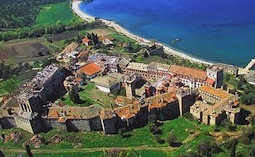 A parliamentary preliminary investigation committee on Friday night recommended the referral of five former New Democracy Ministers to a Special Judicial Council over the controversial Vatopedi-state land swaps affair.
By a majority vote of the ruling PASOK MPs sitting on the committee, which was investigating possible criminal liability in the affair, recommended in its conclusions the referral of the following: former government spokesman and Minister of State Theodoros Roussopoulos, former Agriculture Ministers Evangelos Bassiakos and Alexandros Kontos, former Deputy Finance Minister Petros Doukas, and former Minister George Voulgarakis to a judicial council for implication in the land swap case regarding Lake Vistonida and its surrounding areas.
The five will be referred to the Special Judicial Council following the expected adoption of the preliminary investigation committee’s conclusions by the parliament plenary.
According to critics of a series of controversial deals, the state exchanged prime real estate holdings throughout Greece.  These include buildings in the Athens Olympic Village, for remote tracts of land where development is either restricted or prohibited, such as forestland, RAMSAR protected areas around Lake Vistonida, and archaeological sites.
This specific case concerns suspect land deals by the Vatopedi Monastery, where low value properties on the shores of Lake Vistonida were exchanged for prime pieces of public real estate in other parts of the country in transactions carried out by Hellenic Public Real Estate Corporation which were approved by the ministers.
(source: ana-mpa)