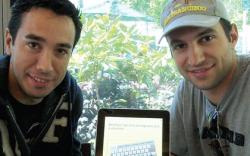 “With excitement we announce that Blind Type  was acquired by Google! We want to thank you all for your tremendous support and positive response.”
This brief statement was posted on the website of the Blind Type company by its founders. Kostas Eleftheriou and Panos Petropoulos.  The two men are cousins from Greece who created their fortune in Silicon Valley.  The slogan of the company is “transform ideas into solutions”.
With this acquisition from the most famous technology company in the world, the two Greeks, aged 26 and 38 respectively, achieved their dream in the technology sector. Their success is due to their decision to address a pressing problem that arose on touch screen mobile devices nicknamed the “disease of adult fingers”.
What exactly is this “disease”?  It is the challenge one faces when trying to write even a short text on a touch screen mobile phone, where the tiny buttons on the screen are difficult to type; the text is usually full of errors.
The two young Greeks gave the solution to this problem with an impressive application that corrects errors in signals users make while typing. At the same time it predicts the word you would like to write even if the letters you have typed do not make any sense.

The Blind Type is a product that promises to revolutionize the huge industry of touch-screen devices experts state.  Before it reached the market, Kostas Eleftheriou and Panos Petropoulos had built a page on the internet which showed their product. In one night the application was placed first on technological news sites.  Thus came the acquisition by Google.

Kostas Eleftheriou is the creator of iSteam.  iSteam is one of the most popular applications of the iPhone, which has been downloaded by more than 3 million people. The inspiration that the young artist had in his bathroom reached the interest of large newspapers such as the New York Times and the London Sunday Times.  Kostas Eleftheriou collaborated with two other Greeks and it took a mere seven days to write the program.
The first week 1 million people downloaded iSteam, and as reported by the New York Times granted the creators of the application more than $100,000 dollars in just three months.
This success attracted the attention of Prime Minister George Papandreou who made specific references to iSteam and its three authors in a recent speech.
Note that the group that created iSteam and the duo who built BlindType, were forced to leave Greece in order to monetize their ideas.
Because of the large bureaucracy in the nation, Kostas Eleftheriou founded the company behind iSteam in England. When he entered the pipeline in BlindType, sought his fortune in Silicon Valley.  It took just 15 minutes to set up a new company simply by filling out a form via the Internet. His cousin, 38 year old Panos Petropoulos left Greece in May to join him.
Panos Petropoulos studied marketing, but says he never particularly loved the area.  Instead he deals with computers since he was 15  and as stated in his biography:  “it sometimes seems to have more flexibility with the x86 programming language than the Greek.”

26 year old Kostas Eleftheriou, along with his related studies at the British University of Warwick, has created games for PCs and applications for the iPhone and the trading platform in the forex market ZuluTrade.