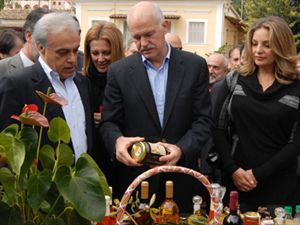 Greek Prime Minister George Papandreou visited Corfu on Sunday. During his visit he adressed the community of Kunopiastes, where he discussed with local people and tasted  local products. Additionally the PM had the opportunity to meet with student representatives who discussed the students’ accommodation in Ionian University.
At 18:00 p.m the Greek Prime Minister adressed the local representatives and locals at Corfu Palace Hotel in central Corfu. Numerous residents and youth were in attendance. During his speech, Mr. Papandreou stated that:  “I prefer this criticism rather than letting Greece go bankrupt. The difficulties are nothing before the consequences of a bankruptcy, particularly for the weaker strata and the middle class … I shall not let Greece collapse; it is my patriotic duty.”
The Premier was accompanied by his wife Anna and a number of ministers and under-secretaries. He left the island late at night.

Sifnos, one of the islands of the Western Cyclades, is a balance of beautiful beaches, nightlife, pristine white villages, low-impact tourism.
Archaeology