A tribute to Giorgos Karagounis: 100 games for Greece 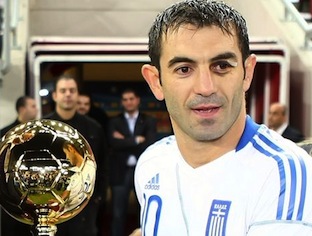 Giorgos Karagounis made his 100th appearance for the Greek national team on Wednesday as he captained them to a 1-0 win over Latvia in their Euro 2012 qualifier.
The former Inter Milan and Benfica man will always be best remembered for scoring Greece’s opening goal at Euro 2004, after capitalizing on a Paulo Ferreira error and driving beyond Ricardo from outside of the box to shock the honest nation.
It is a moment that is often forgotten by commentators and fans given the importance of strikes by the likes of Angelos Charisteas in the final and Traianos Dellas in the semi-final against the Czech Republic because of their emotional weight; yet one shouldn’t underestimate how much of a lift Karagounis’ effort must have been for players who took so much self-belief from it that they won the tournament altogether.
His goal was a statement of intent, that Karagounis and his teammates wouldn’t simply make up the numbers and his relentless running and hassling in midfield was the embodiment of that attitude.
That he was suspended every second match and missed the final is reflective of another rather less admirable part of his game that includes a shameless devotion to the art of simulation and general petulance that seems to have worsened as his legs have aged, though it’s all part of the reason Greece fans love ‘Kara’.
Indeed, as his Euro 2004 teammates largely faded away after the tournament or never quite replicated the heights that they hit in Portugal, Karagounis remained a constant in the national team and largely carried them through qualifying campaigns.
Along with Sotiris Kyrgiakos and Theofanis Gekas I consider him one of the key men as back-to-back qualification for Euro 2008 and the 2010 World Cup was secured and it was during that three or four-year period that he again proved his class.
One of the most talented footballers Greece has ever produced, his relative lack of goals for the national team are not reflective of a wonderful ability when shooting from range and standing over a dead ball, a tenacity in his tackling that is combined with sublime technique on the ball.
The balance in his game and his general willingness to drive the national team forward during an era where it was stereotyped as negative earned him the accolades of the non-Greek press, who for both club and country constantly praised his style of play.
At 33 years of age though his influence is noticeably waning and in truth, I’d rather see the Panathinaikos talisman hang up his boots and end his international career on a fitting note rather than over-extend himself, as his teammates have done in the past.
Whatever he chooses to do, it won’t diminish the key contributions he’s made to the most successful ever era for the Greek national team and one that should have a lasting legacy for the game in his home country.
Debut: Against El Salvador in 1999
Appearances: 100
Goals: 6
Highlights: Winning Euro 2004, captaining the U-21 side to the 1998 European Championship final, captaining his country at their second-ever World Cup