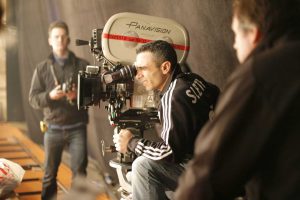 It is not random that Haris Zambarloukos was in Variety’s 2006 list of: “10 to Watch Cinematographers”.  It also wasn’t random that in 2004 he earned a nomination for Best Technical Achievement at the British Film Awards for the film “Enduring Love”, starring Daniel Craig.

Haris Zambarloukos has proven his worth as a cinematographer and a filmmaker through the unique visual perspective he has given to his movies. From the sun shining atmosphere of “Mama Mia” to the mysterious locations of the “Other Man”, and to the intensely colorful and the enigmatic “Sleuth”. If a painter uses paint, Haris paints his movies with light. The recognition for his work started early on in his career right after he completed his thesis film as a student in AFI title: “First Daughter”.  He won numerous awards in film festivals and also received the International Cinematographers Guild Award for Artistic Achievement in Cinematography. Born in Cyprus, Haris currently lives in the UK where he is also on the Board of Governors of the British Society of Cinematographers.  Additionally he has shot numerous commercials, documentaries and short films in the US, Europe and Central America. We had the pleasure to fit into  Haris’ busy schedule and talk with him in an effort to learn who is the person behind the camera who has achieved this unique visual cinematic approach. Simple, with a sense of sincerity and enthusiasm when he refers to his all time favorite movies, Haris has recently completed the principal photography for the upcoming Marvel Film “Thor”.  The movie is directed by Kenneth Brannagh starring Anthony Hopkins.  Haris gave an exclusive interview to the Greek Hollywood Reporter introducing us to his world. A world of light that is definitely worth to be explored.

You studied in the UK. Tell us a little bit about it.

I grew up in Nicosia Cyprus. Later I went in UK to study Fine Arts at Saint Martin’s School of Art. I switched from Fine Arts to film studies in the first year. I didn’t have an ambition in the beginning to become a cinematographer. My life was exclusively centered at start into fine arts and painting. As I continued studying in Saint Martins,  I switched from a Bachelor of Fine Art Painting Degree to a Bachelor of Fine Art & Video degree. I moved from directing to cinematography, as that was what originally had caught my attention and motivated me to pursue film studies. After that, followed AFI in LA. 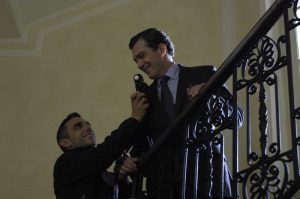 It was fantastic. AFI is a great school. Especially the cinematography section. It was like a mini studio and was very different from the experimental fine art film making which I was taught till then.

What are the things you like mostly about Greece?

I don’t know exactly. Surely It’s home. It’s quite an abstract feeling. Like it might be for most filmmakers,  my cultural and spiritual references come from my childhood and my time spent in Cyprus.

Do you visit Cyprus often?

When I am not working I am in Cyprus.

You had the chance working in popular movies with Hollywood stars like “Mama Mia”, “Venus” and the “Other Man”. Tell us about this experience.

Your experience on a film is based on your love for the script, your passion for the story and your dedication to the ideas of the director. Venus and the Other Man were the type of movies I always wanted to make. I wasn’t really that thrilled at the idea  “Mama Mia” until I met the director and saw the theatrical production. I was inspired by both and temped to participate in the film. In Venus I had already worked with the director and loved working with him. Also, Peter O Tool is one of  my favorite actors and I was very excited at the opportunity to work with him. I got a call from Roger about the film. He told me: “I have
to send you a script and then you tell me what you think”. I just answered “No. You don’t have to do that. Just sign me on”. And he laughed. Mama Mia on the other hand was very different. I hadn’t ever worked on something like that. However there is such a strong human story there and it’s also a hugechallenge for the cinematographer to shoot a musical. Plus, the meeting I had with Phyllida, the director, inspired me and I was fully aware and confident that she would make a film that touched people. And that proved to be true.

How was it working with famous actors like Michael Cane and Jude Law in Sleuth?

Obviously the personality of a human being is very different from their character in the film. You are talking for some of the greatest actors that ever lived. Their professional attitude was exemplary for even how a cinematographer should be. The kind of preparation, the homework, everything was quite inspiring. On a personal level, it was quite obvious they had really an interesting human story behind their lives, something I found intriguing. They were more than happy to share that story with their fellow co- workers on the film. Jude and Peter were particularly conversant to what inspired them to become actors. Michael is a lovely human being but maybe a little more private as a person.

It must be quite a gaining experience to work next to these talented people.

It is, because you see how actually someone is at the top of his field. You are like “Oh! I cannot be part of it and not live up to it!. It’s very inspiring.

In your opinion what are the elements that make a good cinematographer?

I think, number one is to be a storyteller before you become a cinematographer. Cinematography just happens to be your tool of choice. The elements that you use to translate psychology or human condition into a visual form and the clarity of your choices when doing so, define you as a cinematographer.

Maybe that’s why we see a lot of people first as cinematographers and then as directors? Because maybe they are good storytellers?

I think there are very few cinematographers who are also directors. The greatest one I think who has done it, is Nicholas Roeg BSCA nd then maybe Stanley Kubrick. Those two. They are two of my favorite filmmakers. I prefer Nick Roeg myself. He is always an inspiration for me on quite a multi level. People like Conrad Hall ASC or Sergei Urusefsky were outstanding cinematographers because every frame told a story. It wasn’t a beautiful picture. It was meant to be as beautiful as it was. It was sublime I would say and then beautiful. 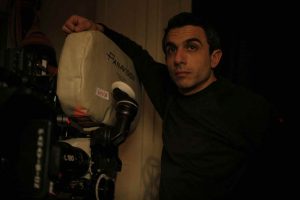 What are some of the things you enjoy doing in your free time?

I like windsurfing and playing guitar. I collect jazz guitars, I play guitar and I wind surf. That takes mostly all of my time when I am not filmmaking.

God! That’s a hard question. It keeps changing every day. I’d say more like films that took my breath away. Most films that Conrad Hall shot. Also “The Cranes are flying”, a soviet film that Sergei Urusefsky shot… phenomenal cinematography. Another one is “Sweet Smell of Success” with Tony Curtis shot by James Wong Howe ASC. This is another example of a phenomenal story, perfectly told through images. I think in a more modern sense, I am a fun of Christopher Doyle’s films.: “In the mood for love” and “Chungking Express”. Great material and images.

Tell us about your latest work you did as a cinematographer for the upcoming film Thor.

I completed the principal photography in June and now I have a few more pick ups to do. The film is going to come out in May. I am very excited about it. It was a great challenge for me and a different kind of adventure. It was something I have never done before.  Also, the chance to work again with Kenneth Brannagh was very rewarding. He has made some very intimate projects but also managed to work on this epic picture with eloquence and great command. I’d rather do a Hollywood movie with Kenneth than with anybody else.