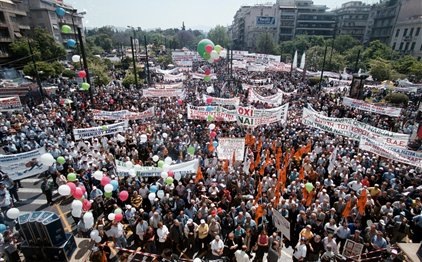 Thousands of state workers have taken to the streets of Athens and other Greek cities today in protests against the government’s austerity plan. The protest, the eighth of its kind, has seen the closure of offices, schools, local administrations, post offices and customs and it means that only the emergency department of hospitals is still functioning.
There was also a four-hour halt to national and international flights after air traffic controllers joined the protests.
The strike has been called by the union of public sector workers, Adedy, and by the communist union Pame, to call for ”the cancellation of the memorandum” agreement with the EU and IMF and, in particular, to protest against the scheduled reform of public sector wages.
Teachers and students have also joined the protest. Students, whose appearance in the front line of the revolt against authority is gaining ground, are occupying a hundred and forty middle and high schools throughout Greece in protest against cuts in teaching, staff shortages, and a feared reform of higher education and problems specific to individual establishments. The occupation movement is expanding, student sources say.