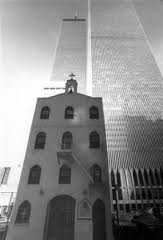 The Port Authority of New York & New Jersey have reinstated negotiations for the rebuilding of the St. Nicholas Church at Ground Zero. Since the attack there was uncertainty whether the Greek Orthodox Church would be rebuilt at all.  Even though many people petitioned for the rebuilding, negotiations were stopped which left many questions on the future of the destroyed church.

The Greek Orthodox Archdiocese of America has been pushing for renegotiations for several years discussing where and how to rebuild it. It was recently stated that as early as next week they may be returning to the renegotiation table with the Port Authority. Former Gov. George Pataki and State Senate Minority Leader Dean Skelos have already stepped up to help the archdiocese.

St. Nicholas Church was founded in 1916 by Greek immigrants who dedicated the church to the patron saint of those who sail the seas. It has served not only the spiritual needs of its own parishioners, but also became known as a place of meditation and retreat for those who worked on Wall Street and in lower Manhattan. It served as a sacred space in which people of all backgrounds working or visiting in the surrounding areas could stop, light a candle and spend a few moments in prayer and reflection. It was located just south of the World Trade Center site and was the only house of worship destroyed by the terrorist attack on the World Trade Center. Its reconstruction is vital, not only as a memorial to the nearly 3,000 innocent people of all faiths who lost their lives on September 11th, but also as a living demonstration of the values of democracy and freedom.