Iron Mike’s Glorious Victory in a Spectacular Fight in Seoul 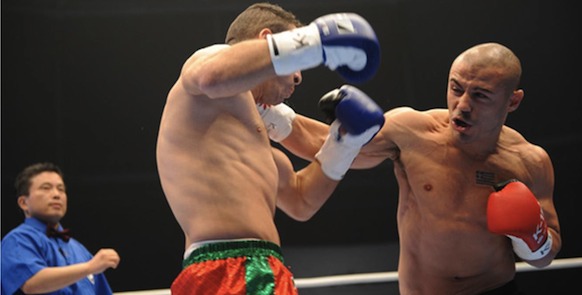 After an amazing fight for the phase of 16 that will stay in the mind of everyone who watched it, the Greek Champion accomplished a great victory over the Moroccan Chahid “The Pitbull” Oulad El Hadj and took his place among the 8 best fighters of the world.

From the beginning of the match, Zambidis started very aggressively and managed to knock down twice his opponent! But Chahid trying to justify his nickname, raised up and tried to start a counter attack.

The third round was a real war with both fighters continuously exchanging massive hits while the presenters of the event and the audience were watching breathless the great combat.

At the end of the fight the crowd stood up to cheer for both fighters for the amazing spectacle they offered, believing that Mike Zambidis was the clear winner. But the referees had a different opinion, declaring the fight should go an extra round!

During the extra round the superiority of Iron Mike was confirmed, knocking down his opponent with a massive blow for the third time. Chahid managed to avoid the KO because of the bell that rang for the last time.

When Zambidis was announced the winner, his team composing of Babis Papadopoulos (G. Mallios assistant coach), his gymnast Alexandros Papadionysiou and his manager Tonia Fouseki, rushed inside the ring to cheer for this spectacular victory.  TV presenters, experts and fans, stated that it was the best and most spectacular fight they had ever seen! With this win, Iron Mike reaches the impressive number of 143 successes in 160 fights, with 84 KO. His next fight will be on November the 8th in Tokyo, Japan for the final 8 of K-1 MAX.

The Greek Champion, satisfied from his performance and the result stated: “I am really glad that I won this strong and very important fight, and lived up to the expectations of the people who believe in me! My training payed off and now my attention is to the next phase with the 8 best fighters of the world”.