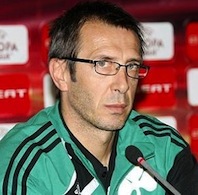 Panathinaikos coach Nikos Nioplias has withdrawn his resignation after the club administration backed him, technical director Kostas Antoniou said on Sunday.
“The resignation of Nikos Nioplias should have been withdrawn and it was,” Antoniou told reporters barely 30 minutes after the coach said he wanted to quit in a post-match news conference.
“Everything was done under pressure and in the heat of the moment. It is reasonable to come under lots of pressure at big clubs but he can cope with it,” Antoniou added.
Nioplias, who watched Panathinaikos beat Ergotelis 4-1 in the Greek Super League on Sunday, had been severely criticised in the media after the team lost their first two Champions League matched 5-1 at Barcelona and 2-0 at home to FC Copenhagen.
“I will seek to have a meeting with the president in the coming week to tell him that I do not want to sit on the bench of the team any longer,” the 45-year-old told reporters.
“It can’t be that in the summer you are the best coach ever and then a month later you are apparently a laughing stock.”
Nioplias replaced Henk ten Cate as coach last December and ended a six year trophy drought for the Greens by leading them to the domestic league and cup Double.
Panathinaikos cut rivals Olympiakos Pireaus’s lead to a point with Sunday’s victory.
French striker Djibril Cisse scored twice, taking his season’s tally to five, with Kostas Katsouranis and Nikos Spiropoulos also on target.