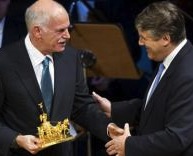 George Papandreou was honored for embodying the “strength of truthfulness” at a ceremony held by the private Quadriga foundation.  It issues its awards on the anniversary of the German reunification.
Papandreou said the award was: “recognition of a job well done by a whole nation…
We have together shown our determination, our political will to uphold our responsibilities, our determination to push through deep change in our country”.
Papandreou’s government revealed after it was elected last year that Greece’s budget data had been falsified and sharply revised its budget deficit upward.
“You looked the sad truth in the eye and told it to your citizens without mincing words,” Josef Ackermann, the chief executive of Germany’s biggest bank, Deutsche Bank AG, said in a speech honoring the Prime Minister.