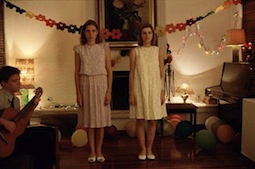 “Dogtooth” has officially been submitted as Greece’s entry for the Foreign Language Film Category of the Academy Awards. The movie has taken top honors at the country’s national film awards.  It also took a prize in Un Certain Regard in Cannes.

Dogtooth or Κυνόδοντας “Kynodontas” is a 2009 Greek drama film directed by Yorgos Lanthimos.  It is the Greek director’s second feature film. It was produced by Boo Productions, an Athens based advertising company. The Greek Film Center supported the project with only about 200,000 euro and many volunteers worked on the production.  Anna Kalaitzidou and Christos Passalis come from the theater world and were cast after having worked with Lanthimos in the past. Mary Tsoni was also in the cast. In making Dogtooth, Stage and Film Director Yorgos Lanthimos used an open approach to both acting and directing. He believed it would look fake if he involved too much in the details. For art’s sake, the lack of meticulous planning served this film well. Not until last minute rehearsals did he start to develop the idea of how the film should be shot; a style where he tried to combine a realistic environment with “really strict framing and a cool, surreal look to go with the narrative”.

This story is a twisted, odd, unsettling “satire” about a Greek family who keeps their teenage children locked up in a country estate. The movie premiered at Cannes last year where it won the top prize in the Un Certain Regard Award for that category. According to one film critic: “I saw this at Cannes last year, didn’t enjoy it one bit, but it went on to win a big award there and has been heralded by fellow critics”.