TechNews
GreekReporter.com USA Contacts of the President of the Republic of Cyprus in New York 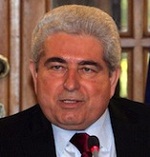 The President of the Republic Mr Demetris Christofias spoke yesterday at the High-Level Plenary Meeting on the Millennium Development Goals. The three day meeting concludes today with the adoption by the Heads of States and Governments of a Political Declamation, which provides for an action plan to speed up and strengthen the efforts for the achievement of the Millennium Goals. The President was accompanied at the meeting by the Minister of Foreign Affairs Mr Markos Kyprianou, the Government Spokesman Mr Stefanos Stefanou, the Permanent Representative to the UN Ambassador Minas Hadjimichael and the Director of the Diplomatic Office of the President, Ambassador Leonidas Pantelides.

Afterwards, President Christofias had a meeting with the United Nations Secretary General Mr Ban Ki-moon, with whom he discussed the course of the bicommunal dialogue, and then with the President of Serbia Mr Boris Tadic.

Yesterday afternoon, President Christofias had a meeting with the President of the Palestinian Authority, Mr Mahmoud Abbas.

Speaking to the press about his contacts President Christofias said: “After the meeting with the Secretary General, I had a working lunch with the American Jewish Committee. I was given the opportunity, before many guests, to analyse in depth the Cyprus problem and of course our vision in relation to the wider Middle East, Cyprus, Palestine and the state of Israel.

It was a very good discussion, I must say, with a high-level of interest on behalf of the Committee members, who have promised that we will continue these contacts. They have agreed with me and the position I have expressed that surely the Palestinians have every right to have their state and Israel to have its own state within conditions of peaceful cooperation and good-neighbourly relations. I consider this a positive element.

This is perhaps the first time that the American Jewish Committee gets involved with such interest in the Cyprus problem. And they have pledged to continue and try to help us resolve the problem in the most just way possible. This is, in any case, agreeable and a positive element.

I had a meeting just now with a good old friend of both me personally and of Cyprus, the President of the Palestinian Authority Mr Abbas. We have shared our views and our worries as regards the course of the Cyprus problem and as regards the commencement of negotiations in an effort to resolve the Palestinian problem. The big problem for Palestinians is the non-extension of the moratorium on settlement construction by the Israelis. Naturally, we consider that the moratorium must be extended in order for President Abbas to have a greater capability to negotiate. Otherwise he will be in a very difficult position.

We have reaffirmed the relations of friendship and solidarity between the two peoples and between us, of course, and I have promised President Abbas that I will visit the Palestinian territories the soonest possible”.

For thousands of years, Greek honey has been collected for its delicious, sweet taste and healing, nutritious properties.
Diaspora