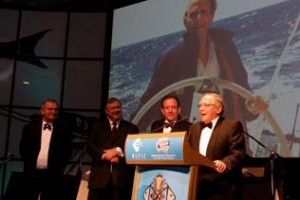 82 year old fishing pioneer Theo Kailis from Kastelorizo has passed. Kailis is one of the most important pioneers in the development of the Australian fishing industry,  particularly in Western Australia.
His career spanned more than six decades during which he helped to put Australia firmly on the fishing map. Tributes have come from abroad and many fishing industry leaders in Australia.
According to press reports from the region Kailis oversaw and helped push the transformation of the West Australia fishing into a billion dollar export industry.  His achievements include the commissioning of the first Randall lobster boat that revolutionised deep sea lobster fishing in ’60’s. He worked on development of the Northern Prawn Fishery and the new Patagonian Toothfish fishery in the Antarctic.
Kailis helped create major changes in the commercial fishing industry during his career. He established the Kailis and France Group in partnership with Murray France. The Group became one of Australia’s most diversified and valuable seafood businesses.  It worked with every fishing sector;  from processing, to local and export marketing, and to innovative value adding top fresh fish, lobster and prawns.

The Group has export markets in Europe, USA and Asia.  It has been involved in foreign joint ventures in many countries.  Currently Theo was Executive Chairman of a joint venture with the largest food and fishing company in Spain.
West Australia Fishing Industry Council Chairman Kim Colero claimed Kailis was an: “Immensely popular pioneer who had helped many young fishermen get their start in the industry.  He helped all sorts of people through their lives and careers.  He was a nice guy.  His company pioneered everything.  He put in the hours, he was very innovative, he was prepared to have a go at anything.”
Western Australia’s Shadow Minister for Fisheries Jon Ford said Kailis would be remembered as “a great legend” of the local industry.

Designer Yannis Dimoulis uses his platform of over 23,000 followers to explore the often-comedic nuances of being Greek-American.
Greece