2 Men Killed by Train in Patra 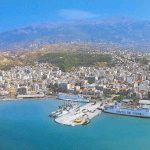 Two men were killed in Patra early yesterday morning.  The cause of their deaths was due to walking into the path of an incoming train outside the eastern Peloponnesian city. The two men whose identities were not revealed, stepped onto the tracks at Ayia without noticing that the train was fastly approaching. According to investigators, by the time the conductor spotted the pair on the tracks, he was unable to stop the train which careened into them and killed them instantly. The stretch of track where the accident occurred will be closed while further investigations are carried out.

If you're in a crowd in Greece and shout "Mr. Papadopoulos," the most common surname in Greece, chances are that at least one man will turn his head.
Charity